Education as a Bipolar and Tripolar Process. It is a systematic process through which the child and adult acquire their knowledge, skills, experiences, attitude. It makes an individual civilized, refined, cultured and educated. For civilized and socialized society, education is the only means. The main goal of education is to an individual perfect. Every society gives importance to education because it is the key to solve many problems of life.

Education as a Bipolar and Tripolar Process

Education as a Bipolar Process:

Education was considered in the past as a uni-polar process. Adams in his Book ‘Evolution of Education Theory’ said that education is a Bi-polar process in which one personality acts upon another to modify the development of other personality.

It considers that in the process of education two people are involved. The one is an educator and the other is educand. It was said that the teacher seeks the modification of the development not only through imparting knowledge and skills but also through the direct influences on the child’s personality

The bipolarity of the educational process ceases to exist when the educator and the educand both become one and the same person. It also happens when the educand feels the drive to educate himself when he tries to modify his own nature, develop his own will and purpose, build his own character, acquires knowledge and skills by his own efforts. In that case, education becomes unipolar. It is then when the educational process achieves the main ideal. Self-expression, self-motivation, self –improvement and self-control become the keywords and bipolarity ceases to exist.

Education as a Tripolar Process:

The educational process not only has a psychological side involving the educator and the educand, but it also has sociological aspects too.

According to John Dewey, education has two aspects (1) Psychological and (2) Sociological. He asserts that the development of a child does not take place in a vacuum. He has to live in and for the society, he belongs to. It takes place in and through the society in which the teacher and child both lives.

True education comes through the stimulation of the educand’s endowments by the demands of the social situation in which he/she finds themselves in. The educator is required to stimulate the educand’s power in the total social setting. It is the society which will determine the aims, contents and method of teaching. Thus, the Social aspects of educational process become more important than the psychological aspects.

The function of the educator becomes then the modification of the personality of the educand in light of the need of the society. In this Sense, John Dewey holds, education is a tri-polar process and not a bipolar one.

These three factors actively co-operate in the efficient and successful working of the educational process. 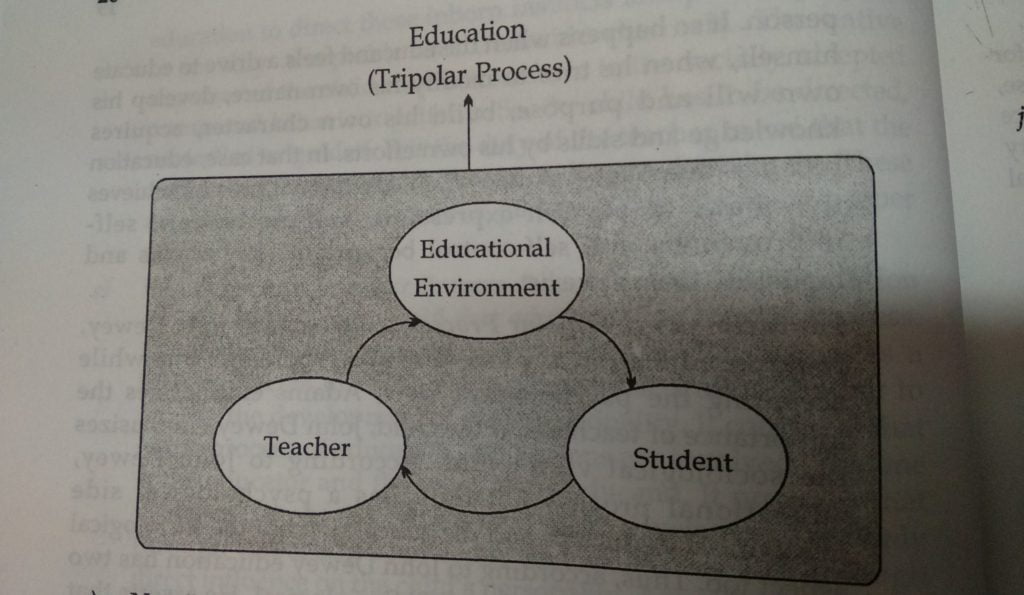 The Teacher: In this process of education a teacher role is two-fold. Firstly, being the important factor of the educational environment, He influences the personality of the learner through his own magnetic personality. Secondly, as a builder of the educational environment, he provides suitable experiences to the learner to develop and use fully his skills and capacities to achieve the good of his own self and the welfare of his society of which he is an integral part.

By his own attitude and behaviour, the teacher builds the character of learners and infuses in them respect for moral and spiritual values. He must be aware of the modern strategies and techniques of teaching and be capable of using them to the best of his knowledge to make teaching-learning more effective.

The Learner: Education should develop the personality of the learner according to their need, interest and ability. Everything concerning education is now child-centred. The Aims, Methods of teaching, curriculum are based on student’s interest.

No Teacher can be successful in his activities if he fails to understand the learner with which he is to deal with. To make teaching natural and effective the teacher should not be the master of content only but also known fully well the stages of development and their characteristics.

Educational Environment or the society (The social Forces): The social forces provided by the social environment/Society supply the materials to the teacher and they are taught in the form of the curriculum in schools which is again framed in the light of the needs and demand of the society. Thus, the school functions according to the needs and cultural background of the society and modifies the society by providing leaders and reformers and acts as a social agency and an agency of social control.

School plays a tremendous role in strengthening the society and its members. Schools must be able to cater to the present needs of society. It is the most powerful instruments of social change. But unfortunately, today many schools are participating in the race of competition and have become profit/business-oriented.

The school are the main agent of social change that can eliminate various social evils and problems. This can be made possible only when the schools of today would stand realizing that their primary responsibility is not just to prepare the students for the sake of student’s own life, but to prepare them to work as leaders and reformers for the sake of whole society.

Hence, education is at the tripolar process rather than the triangular process as it is a social process with social function.